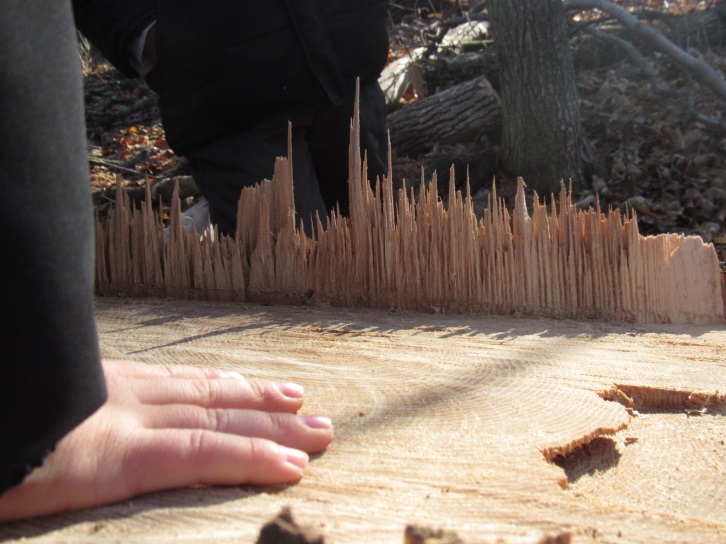 On February 1st, we had the privilege of working with volunteer Tanya Murray (OCT and Forest School Practitioner), as well as an incredible group of 9 students for our 3rd PA Day Forest School at Kortright. We had blue skies, happy children, and 555 acres of forest...it was a recipe for exploration, inquiry, and FUN! We split into two groups, and started out on our first journey of the morning. One group took a stroll through the forest stopping at some newly fallen trees, to investigate their interesting patterns, textures and CITIES! The students decided that the wood left behind on the tree stump looked like a miniature city, one child exclaimed “This tall part is the CN Tower”, so we collected some leaves, rocks, and ramps (you always need a motorcycle ramp) to expand our newly developed forest world! 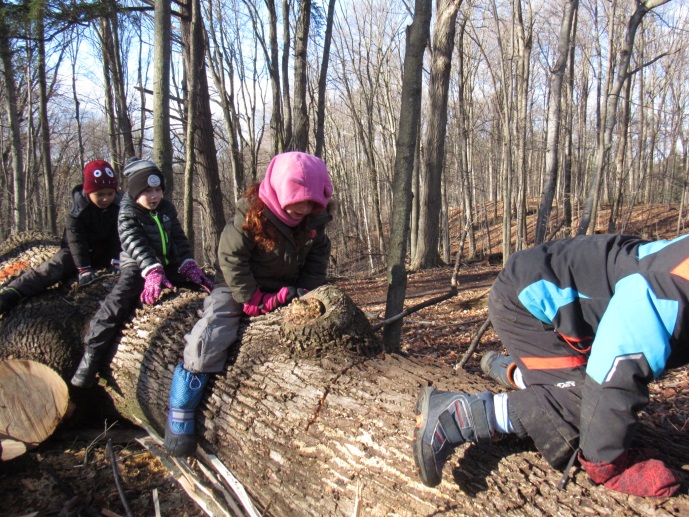 The giant fallen tree quickly loured the children as a climbing structure. We discussed the potential risks, and the children offered suggestions about how we might be able to climb the log. One child proclaimed “we could use another tree for balance” another offered “we could crawl instead of walk”, we pondered these ideas, and decided to stay on our bottoms as we moved across the massive trunk, the burl in the middle proved to be a hurdle, that the children quickly overcame. 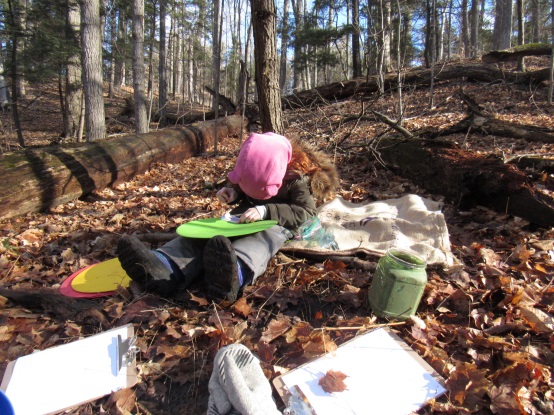 As we continued through the forest, we came upon another fallen tree, with its gnarly roots exposed; some children expressed a need to stop for a rest, so we explored the interesting patterns of the root system. One child found a treasure hidden among the tangled roots. It was a jar, with a note pad and pencil inside. We wondered about who could have left this here, and where it might have come from. We decided we should leave a note, so one child sat down and coloured a page, for all of us to sign. 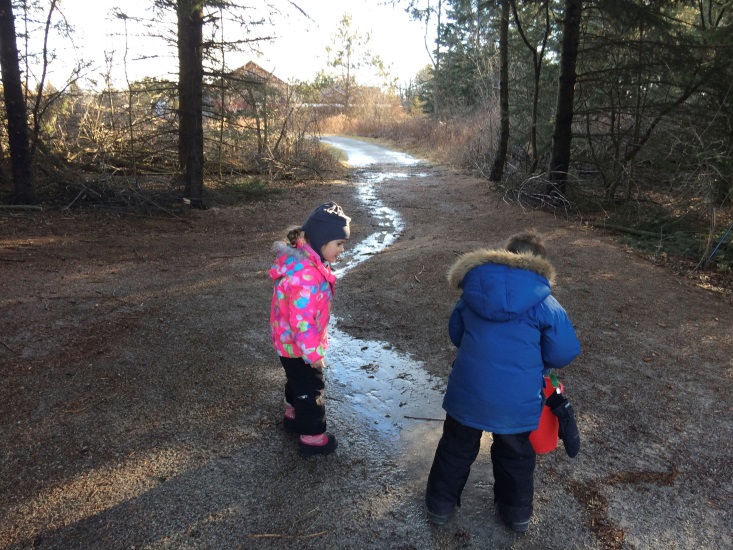 While one group explored the forest, the younger group started along a trail that soon became an investigation of ice puddles along the path. The children slowed down as they approached the ice and explored ways of moving across ice that mitigated their risk of slipping.  Some used small sliding steps, while others took on the waddle of a penguin. With buckets in tow, items of great significance (pine cones, leaves, milkweed pods) were collected along the way.

As they approached a barn along the path, the instructors could hear the birds from the Canadian Peregrine Foundation making calls.  They wondered when or if the children would hear them also. Sometimes a child looked up from the ice puddles when the falcon called out.  The closer they approached, the more heads popped up with an inquisitive glance in the direction of the sounds.  Pretty soon all the children rushed over to the fence to find out what was making the sounds. When the Peregrine Falcon called out, some children fled away from the fence in fear, others eyes lit up.  Soon, some of the children began imitating the sounds of the birds.  When questions came up about why the birds were living here, some children believed that they were in jail because they "were not being nice to everybody" or "because they will scratch us".  Another child expressed that the birds were calling out because they were calling for their babies, that "their babies are in the field, they were not captured!  He's calling because he doesn't know where his baby is." In a turn of imagination, this child continued, "He is calling for me, because *I'm* his baby". 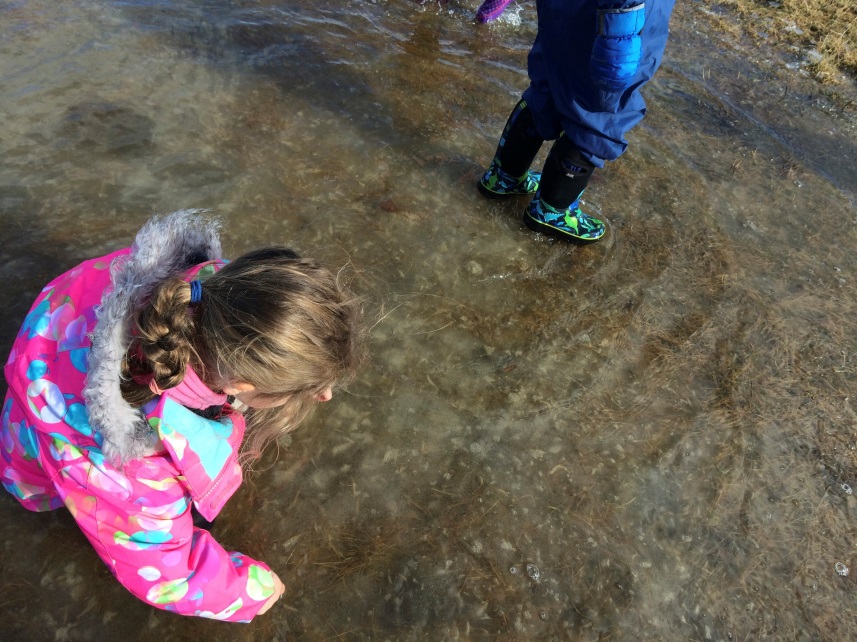 As we continued along the trail we came across a wide deep puddle that was mostly frozen with a couple inches of melt water on the surface. Some areas along the edge crackled when children stepped on it and broke the ice. The children slowly manoeuvred along the surface testing out weak areas and more solid areas of ice. As various slices of ice broke away from the edge, some children began collecting the ice as the ice became representations of magnifying glasses or windows for a bug home.  Grasses frozen in place under the ice were being identified as forming various letters of the alphabet when a child called out, "Look, it's a T in there!"

They continued onto a trail under a corridor of pine which brought us to a site of long grasses, inviting a game of Hide and Seek.  Among the grasses, one of the children spotted a curious thing attached to a grass.  They speculated on it perhaps being a cocoon of some sort and we brought it to the others to learn what their ideas were.  Tanya later learned it was the hardened egg case for a praying mantis insect, called an ootheca! 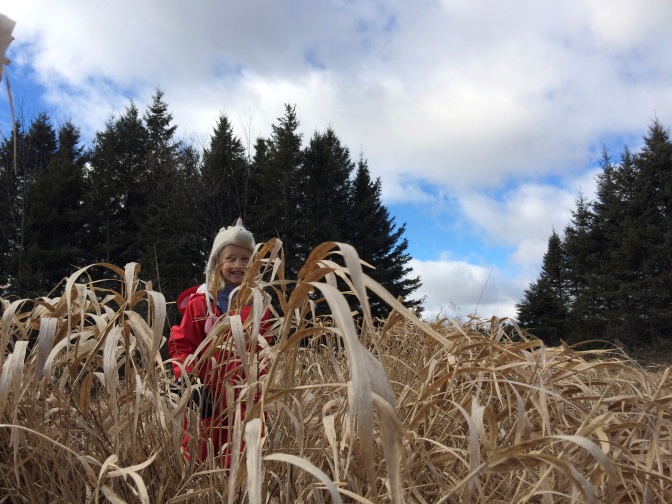 Once we were all together for lunch in our cozy cabin, there was a buzz in the air! We shared our stories and drew maps for the other group to find our treasures, and our special spots from the morning’s journeys. We spent some down time painting and then it was time to get back to the forest- nature was calling! 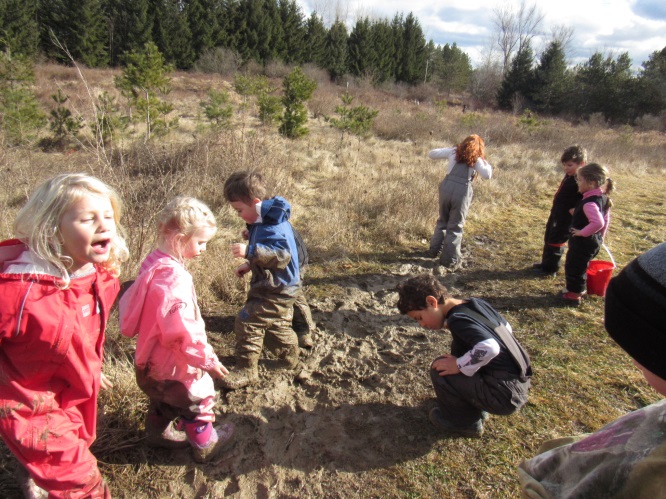 After lunch, the children shared their suggestions for their afternoon project, which included more hide and seek and collecting found items to make a bug home. Following another familiar path once shared with a parent, we clambered up a hill which revealed a giant mud puddle! It didn't take long for some of the children to test out gooeyness of the mud.  As the children tried to pull their boots up, the mud pulled back. We laughed about how mud loves to eat boots.  As mud was explored, a couple of other children took to building and designing their bug house using pine cones, stones, milkweed seed pods and  fluff, dried grasses, leaves, mud, ice chunks, and sticks. Soon most of the children were contributing their visions for the bug home, negotiating where a pathway could be arranged and where the flower garden should go.

Off in the distance, the other group was spotted and stories about our adventures were shared. We joined together and enjoyed the softness of the mud puddle, and the warmth of the sun. Before the day ended, we made our way down into the valley, to soak in the last sun rays of the day, and enjoy a delicious fire side treat, bannock and maple syrup.

The Forest School day is truly unique. It allows children to learn through their own curiosities and provides them with an outlet to create, inquire, build, imagine, and explore nature, something many children today are sadly missing out on. We learned a lot from our day outside with the students, and we left the forest with an abundance of positive energy and an amazing sense of peace and calm, not something one usually experiences at the end of a work day! We feel truly lucky to have had this day in the forest, and we are looking forward to our next Forest School PA Day on June 3rd. 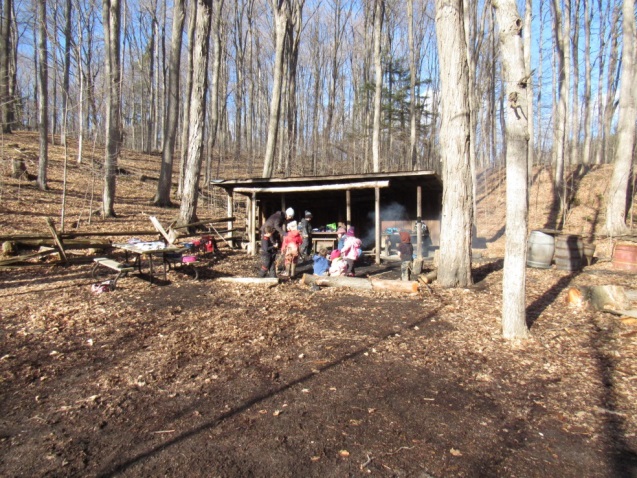 or
Please check your e-mail for a link to activate your account.
Tweets by @YRnature